Please acknowledge that you have read and 'accept' the below before proceeding.

This site and contents are the copyright of Hugo Grenville and may not be reproduced without prior permission at any time, in any form.

The following is strictly necessary in the operation of our website.

This website will remember your visit for the current session and that you have agreed to our copyright. The following are not Strictly Necessary, but are required to provide you with the best user experience and also to tell us which pages you find most interesting (anonymously). 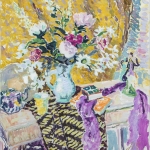 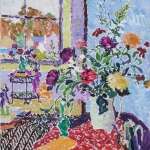 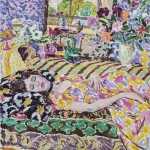 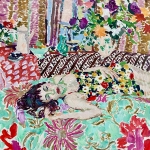 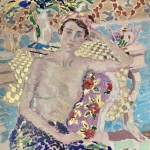 Five beautiful new paintings by Hugo are featured in Morningside Gallery’s Autumn Exhibition in Edinburgh. The paintings are a combination of figurative and interior scenes, with Hugo’s celebrated use of exuberant, jewel like colours and exquisite pattern.

‘Hugo’s paintings are a celebration of pattern and colour and indeed life itself. Joyous and dreamlike, they are a reminder of the transformative power of light and colour.’

Here are some notes from Hugo on the ideas and inspiration behind this body of work: 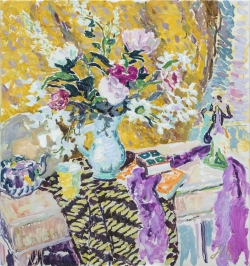 Still Life in Yellow and Pink

This was the first painting I made after the start of the Lockdown, and it was, at least in my own mind, a defiant expression of hopefulness, and faith in the future. I have always believed that the abstract elements in picture making, the shapes, colours and quality of light, all communicate at a subliminal level; they connect to our unconscious, like chord sequences in music, and thus can change the way we see things.
This palette of and yellow, violet and pink, and the patterns and mark-making that bind the narrative together, are intended to suggest feelings that transcend the limitations of the here and now, and evoke a sense of joyfulness and exultation, like singing a hymn. 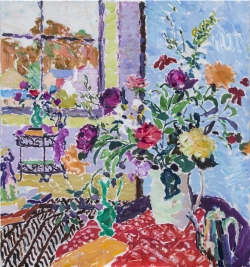 I have always found the domestic environment to be a huge inspiration for my painting, with its contrasts of light, the allure of vibrant patterns in the fabrics, and the hidden stories suggested by the arrangements of objects and furniture. As with Still Life in Yellow and Pink, Spring II uses colour to express a particular mood, but the palette here is almost the opposite: there are no primary yellows, just a sequence of blue-violets and minty greens, with the rather cool reds providing the harmony.
The mood is perhaps quieter, more contemplative and serene, but there is still an unmistakable sense of optimism and delight in the arrangement of flowers and fabrics, while the window draws the viewer’s eye to the outdoors and the promise of a gentle spring afternoon. 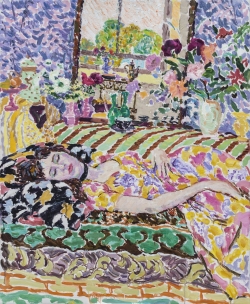 Throughout the spring and summer of 2020, I have been preoccupied with the relationship between the domestic interior, and the sense of another world, an exterior world, beyond. In most of the paintings made during this period I have used a mirror, carefully placed in the upper half of the composition, to reflect a hint of the outside world, glimpsed through the window of my studio. This arrangement also acts as a compositional device to allow the viewer’s gaze to settle at a certain point at the back of the design, a point reached by following the diagonal lines of the young woman’s dress from right to left, and then left to right along the brown and green stripes of the fabric in the middle of the picture, before finally following the sweeping arc of the flowers to arrive at the little table under the window.
This is a picture within a picture, a scene that the artist can only see in reflection, because he is standing with his back to the little table under the window; the mirror affords the artist, and thus the viewer, a simultaneous vision of two separate indoor spaces, and an outdoor space, which all connect to the idea of the day-dreaming figure, gentle and relaxed amidst the flowers, a point of stillness in a restless sea of patterns. 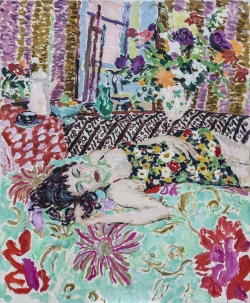 Dreaming Amidst the Flowers

In her everyday working life, the young woman in this painting manages a vintage dress shop owned by the daughter of Henry Moore, and here she is wearing a 1950s cocktail dress of yellow and white flowers on a black ground, and it is this vibrant shape of staccato lights and darks which anchor the flowing textile designs, and allows for the striking contrast of the pale alabaster hue of her skin with the colour fields of deep turquoise and dark pink, for the eye is so often drawn to the greatest contrasts of light and dark. There is a dialogue here in which the actual flowers, the ones in the jug, seem to be in conversation with the printed flowers, the ones that inhabit the flat planes of fabric, so that the composition is on the edge of sliding away from the restraints of the third dimension.
In the words of my American art dealer, these paintings “are starting to slip gently from the figurative world into the land of abstract expressionism, where the narrative is essentially communicated through the dynamics of brushmarks and the application of overlapping fields of colour.” Although she is clearly physically present in the room, the young woman is asleep, and the window which you can see in the mirror, reminds us that her dreams may be transporting her elsewhere, perhaps to some far away Paradise.

When I first visited the Louvre, as an eleven year old boy, I was deeply struck by the other-worldliness of the early Renaissance painters, almost as though I had opened a door and glanced fleetingly at a vision of Heaven. Later, in my twenties, I travelled in Italy, and when I came up close with the work of Mantegna, and Fra Angelico, and Piero della Francesca, I had the same feeling, that these artists could see beyond the temporal world. And the tool which seemed to be particularly effective in invoking the spiritual was the “unrealistic” use of gold leaf: in other words, gold leaf was applied as an idea, not as a description of a surface. The artist might place his model, in the role of the Virgin, in a blue chair, and thus paint the chair blue, but the Virgin’s halo, which of course couldn’t actually be seen, and was an idea, not an observation, had thus to be described in a different way: gold leaf seemed to do the trick admirably.
In this secular painting, I have used gold leaf to accentuate the other-worldliness that I sense in the studio: the way time stands still; the manner in which this half dressed young woman, seated in repose, seems to reveal something of her inner life; and the constantly bewitching way in which spaces go on reinventing themselves through the re-arrangement of objects and fabrics: you change the position of jug, or a chair, or swap the agapanthus for some scabious, and suddenly it’s a new interior, a new space to explore.